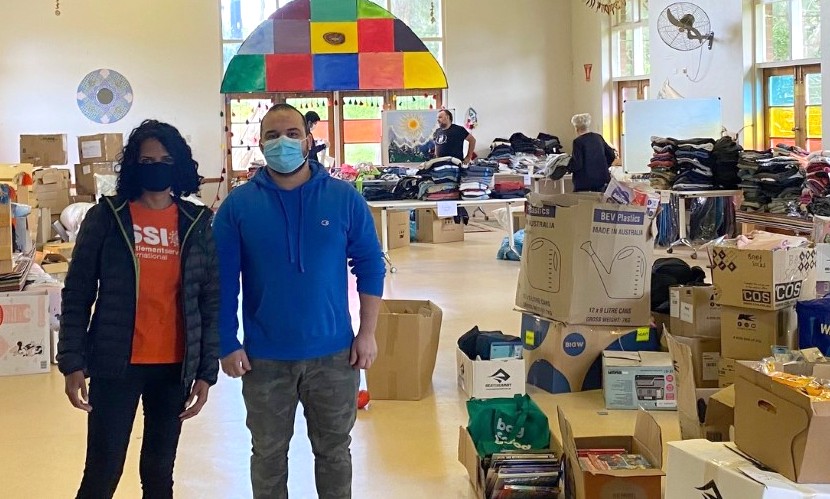 I am one of many who turned on the news in late August to the scenes of men, women and children clinging to the wings of aeroplanes desperate to escape the savaged Afghanistan capital, Kabul. People begging and pleading for their babies to be taken to safety, even if it meant they may never see them again.

I cannot imagine what it must feel like to wake up to the sound of gun fire and bullets as they ricochet through war-torn streets. To hear the screams of my neighbours as they flee their homes.

As a privileged Australian, I picked up my iPad and searched, ‘how are women punished in Afghanistan?’, and ‘what are they facing under Taliban rule’. Public floggings, executions at point blank range and gang beatings were top of my Google search.

According to CNN reporters, this is for the ‘crime’ of not having the money to cook for a group of soldiers, for being writers and activists and for refusing to give up their rights as women.

When the Taliban were last in power some twenty years ago, Afghan women were generally not allowed to leave their homes except under narrowly defined circumstances. Those who did, risked being beaten, raped, tortured, or executed.

Since regaining power, the Taliban leaders have insisted that this time will be different, and the regime will be more tolerant. However, women have been escorted from their employment with their male counterparts taking their seat, public murals of female fashion models have been removed and, according to a Taliban spokesperson, women will need a chaperone during journeys of three days or longer.

In the last 20 years, women in Afghanistan have been at somewhat a steady pace alongside the western world. As of April 2021, there were over 4000 women in law enforcement, more than 200 female judges in top legal courts and according to World Bank data, in 2011, a 65 per cent surge of female participation was reported in education for women and young girls spelling freedom.

For many girls and young women, they were born into a regime of overseas protection. With much of the military presence consisting of US, British and Australian troops, life came with somewhat order. Most women have never lived under Taliban rule — and their future is terrifyingly uncertain.

Settlement Services International (SSI) is a community organisation and social business that supports newcomers and other Australians to achieve their full potential, including supporting the majority of people in NSW on humanitarian and bridging visas.

They work with people who have experienced vulnerability, including refugees, asylum seekers and culturally and linguistically diverse (CALD) communities, to enable them to overcome inequality.

Over the last two months, people from all across SSI have been working hard in the background to advocate for and support the resettlement of Afghan people in Australia.

Since the news of the fall of Kabul to the Taliban first broke, SSI has searched for ways to support people living in Afghanistan who were abruptly plunged into a state of uncertainty and fear.

For SSI this became a moment for action. They joined other humanitarian organisations, human rights groups and Afghan communities in Australia in advocating to the government to aid Afghan refugees fleeing this violence, especially those who were most vulnerable – minority groups, such as women and girls who are at risk.

SSI was then engaged in the provision of settlement services and case management support in NSW to Afghan arrivals, under the Australian Federal Government’s Humanitarian Settlement Program (HSP) on arrival, in hotel quarantine, and for up to 18 months in the community. Read more here.

SSI has seen an overwhelmingly positive response from regional and metropolitan communities through an ongoing influx of generous donations to Afghan refugees. Tune in here to watch an SBS interview with SSI.

SSI’s warehouse in Sydney is inundated with physical donations, and they’re now able to accept gift cards, which they can give to Sydney-based evacuees. Donate today: https://ssi-initiatives.raisely.com/

SSI in Newcastle said that families are now equipped to purchase food and clothing with cards redeemable at supermarkets and retail chain stores, thanks to tremendous efforts by Uniting Churches in Adamstown and New Lambton for driving the appeal. Read more here.

He said he was overwhelmed by the welcome he’d received from the local community in Newcastle.

“Many thanks to the Newcastle community for your generous donations,” he said.

SSI Gender Advocate Najeeba Wazefadost, who fled Afghanistan with her parents in 2000, explains, “Afghan women had lost hope for peace and stability and were once again finding themselves as prisoners of their gender. Women’s rights activists, women politicians and other women leaders now face the fight of their lives.”

“We have heard the distress and concerns of the Afghan community in Australia and worry that refugees living in Australia or in neighbouring countries such as Indonesia and Malaysia will never see their families again.”

But is the Australian Government ready to step up to the atrocity which is unfolding in Afghanistan?

As a woman in Australia, I get to choose how I learn about global tragedy via trending algorithms, news bulletins and media headlines. I get to choose when I have heard too much. I get to mute brutality. I can wear what I want, go where I want and barely give it any thought — because I have freedom on my side.

The pile of books on my bedside table are written by female writers who have kicked down societal norms. My boundaries for a happier life are based on the rules I set for myself, and not those inflicted upon me.

As a writer for women’s health and happiness, I feel incredibly privileged and in turn somewhat useless watching the news.

As a woman, who has spent the last decade discovering what it means to find inner freedom, I am guilty of not looking above the parapet enough. For not fully understanding the rights of my global neighbours.

Until everyone is safe, we are not safe. And we can do so much more.

What can you do to help the people from and in Afghanistan?

SSI continues to advocate for the safety and wellbeing of Afghan people living within Australia and abroad.

SSI is currently ascertaining the needs of the recent evacuee arrivals. As SSI is limited in being able to receive and manage material donations, the most effective donations are gift card vouchers for families to purchase clothing and essential items, or make a donation for Care Packages below.

2// SSI fundraising – Help create a better future for all Australians

SSI has a general fundraising campaign you can donate to here.

SSI is able to accept gift cards, which we will distribute to the Afghan emergency evacuee refugees who have arrived into Sydney (e.g. Woolies, Kmart, Coles/Myer). These can be sent to SSI’s Parramatta Office: Ally Hensley is a writer, speaker, and advocate for women's health and happiness.   Ally has written for leading publications on mental health, infertility,... View Profile

The Comeback of the Covid-19 Lost Leaders

Just when the conversation was heating up about gender equality and the disproportionate pay gap between male and female co-workers, the global pandemic reversed the efforts of progress for...

Why Thinking Inside the Box Can Save Lives

When we think of animation, we picture illustrations and digital storyboards coming to life. When a person shares exciting news in a happy state we say, “don’t they look...

Are we capable of trending real change?

In a country urging their citizens to return, I, on the other hand, was frantic to get out. We are the generation that will always remember the...