Food, travel, entertainment, labour, there’s very little you can’t get at the touch of a button these days. And, I’m not complaining, ordering Uber Eats on a Sunday afternoon from the comfort of my own couch is my greatest lifehack.

These companies – Airbnb, The Iconic, Uber of course – have paved the way for an economy defined by its ability to provide products and services immediately. But, as we begin to strip out these layers of person to person interaction more than ever before, will this change the way we communicate?

The on-demand economy is a $57billion industry according to an article produced by inc.com in mid 2017. Neil Jackson, CEO of Viostream a Sydney based company providing video streaming solutions, indicates that the move towards immediacy is based on a collective ‘want it now’ mentality. “Once a decision is made, people want it now and if that process takes too long or is too hard the opportunity is lost. If a video doesn’t load within 2-3 seconds people move on. This all leads to the requirement for digital based businesses to not only be simple, effective and visually appealing but also super-fast,” he says.

So as we delve further into a world where we mostly operate from our phones and devices, it’s clear that a new way of communicating is emerging.

Sarah Cunningham, Viostream’s Director-Customer Success explains that on-demand technology can seize the opportunity by adapting to a new generation of communicators.

“We know that approximately 65% of the population are visual learners, so technology that caters to that will increase engagement. In the Australian work environment, statistics support a low level of employee engagement and as an average across Australia clearly the majority of people don’t classify themselves as engaged,” says Sarah.

Neil explains that technology like live streaming and on demand video is enabling people to communicate and interact with others wherever they are in the world through high quality communications.

“People want to see how leaders and other people talk, what they’re feeling, their emotions and their body language, they want to feel it and so we believe video is a much more effective, collaborative and engaging form of communication.”

But what does this mean for humankind as communicators in the future? Neil says it lies in the hands of the next generation.

“Youth is an important influencer here. As GenY people become C-suite executives and become more ‘corporate like’ GenZ will be snapping at their heels with new business models, solutions and ideas. GenY better watch out or they could find themselves on the sidelines watching the new generation of digital natives playing the game for them.”

For those viewing TEDxSydney from home, Viostream will be delivering this year’s event straight to your chosen device (and no, we don’t mean your couch). 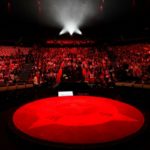 This year’s TEDxSydney was undoubtedly a BIG event for many. Not only was it the largest audience to date, with over 5,000 people in attendance, but the...

Get your coffee quick and easy on event day: Here’s how

The big event is fast approaching, and amongst all the energy and excitement, it’s important to start your day off right. Finding your way through the TEDxSydney...

The era of hyper-connection and WiFi in the sky

It’s 5 minutes before your plane takes off; you power through your phone, jumping from apps, emails, text messages, taking last minute Snapchats and Instagram stories, finalising...

4 people you need in your pit crew of life

It’s very rare that you can predict life, it always has something unexpected in store for you, particularly when you least expect it. But, while you might...

It’s no easy feat running a business let alone getting it to a place of healthy and steady growth. And, while we know these things don’t happen...