In this talk, actor / playwright Moreblessing Maturure provokes questions about who is represented by our arts and cultural spaces. She argues that “the stories, the voices, the faces and spaces we prioritise act as invitations”. Who are we inviting, who are we excluding?

Moreblessing Maturure, the Founder and Creative Director of FOLK Magazine, is a Zimbabwean/Australian inter-disciplinary artist. As an award-nominated actor across stage and screen in various projects, Moreblessing has garnered a great wealth of experience in a plethora of fields within the performing arts including writing, devising, performance directing and producing. Alongside her personal practice, Moreblessing engages in an advocacy and consultancy work seeking to improve the state and nature of representation in Australia’s media and entertainment industries.

As a writer, Moreblessing utilises various forms of linguistic expression ranging from poetic, dramatic and analytical writing. Her performance writing has been marked by various opportunities including long-form development with Playwriting Australia, Australian Theatre for Young People-through their Fresh Ink initiative, Sydney Theatre Company as part of their inaugural Emerging Writers Group and Information and Cultural Exchange Parramatta. Moreblessing is a proud member of Actors Equity and MEAA’s Equity Diversity Committee and the recipient of Celebrating Africans in Australia award for Professional Excellence as an Interdisciplinary Artist. 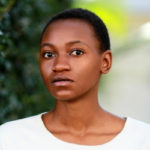