Gerard Reinmuth is a director of architectural practice TERROIR, which has been featured in a number of international exhibitions and publications including AV Monographs’ 20 International Emerging Architects, Phaidon’s 10×10/3 and Atlas of 21st Century Architecture, the Venice Biennale 2008, 2010 and 2012. The practice held the creative directorship of the 2009 National Architecture Conference and Gerard was juror for the 2007 National Architecture Awards.

Anthony Burke specialises in contemporary design and theory in relation to technology and its implications for architecture in the built environment. He is an associate professor and head of the School of Architecture at UTS, an international curator, writer, architectural designer, and a director of the architectural practice Offshore Studio. 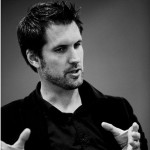 Gerard Reinmuth is a director of architectural practice TERROIR, which has been featured in a number of international exhibitions and publications including AV... View Profile

Why We Should Value our Brutalist Architectural History | Shaun Carter

Ugly or beautiful – it depends on who is looking. In this talk, architect Shaun Carter puts forward a case for the preservation, adaption or reuse of brutalist architecture...

Solar panels and bike lanes will only take us so far. Tarsha Finney shares examples of a few ways we need to radically rethink how we inhabit spaces in...

Dark Patterns: How design seeks to control us | Sally Woellner

Designer Sally Woellner takes us into a world of Dark Patterns, highlighting how the websites and apps we use daily have very specific, and sometimes dangerous, intentions brought to...

Dr George Poonkhin Khut (pronounced Pün-kin, Küt) is an artist and interaction designer working across the domains of contemporary art, design and health research, with a special interest in...

Can you grow food, essentially farm, if you live in the city? Dutch-born Joost Bakker is the creator of hospitality venues Greenhouse by Joost and Silo By Joost, as...

Marc Newson is one of the most acclaimed and influential designers of his generation. He has worked across a wide range of disciplines, creating everything from furniture and household...