15 year old Australian climate striker and teen activist, Jean Hinchliffe explores the world of youth-led climate movements and organisations, and discusses how they’ve grown to hold the power and influence they do today.

Jean Hinchliffe is a 15-year-old school student and climate activist. As a lead organiser within School Strike 4 Climate, she campaigns for legislative action against the sourcing and usage of fossil fuels, along with pushing for Australia to become fully carbon neutral.

She has been passionate about a great deal of social, political, and environmental issues for many years, however first initiated her activism at the age of thirteen through volunteering with the Vote Yes campaign for marriage equality.

Since then, she has continuously volunteered with organisations such as GetUp and Stop Adani. Through her involvement in the climate strikes, she has appeared on The Project and The Feed, and been represented widely through Australian media. When she isn’t trying to save the world, Jean works as a professional actress and has recently wrapped her first television series. 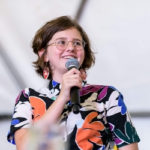 Jean Hinchliffe is a 15-year-old school student and climate activist. As a lead organiser within School Strike 4 Climate, she campaigns... View Profile