Why I became an artist – a semi abstract rumination concerning art and artists. In this talk, the renowned Australian artist and musician, Reg Mombassa examines the downsides, contradictions, absurdities and beauty of the art world, using his “Nine Descriptors”. Any negative aspects are tempered by the observation that without art the world would be a grim and miserable place.

Chris O’Doherty, also known as Reg Mombassa is a New Zealand born Australian musician and artist. He is known for his membership in bands Mental as Anything, Dog Trumpet and The Pinks.

He worked with Mambo Graphics designing t-shirts and posters since 1986 and exhibited paintings, drawings and prints at Watters Gallery from 1975 to 2018.

His diverse range of projects also includes taking part in solo and group art shows in Australia, New Zealand, Italy, USA, France, Britain, China and Thailand. He has had survey shows at The SH Ervin Gallery in 2007, the Manly Gallery and Museum in 2018 and Ambush Gallery ANU Canberra 2019.

His designs were featured in the closing ceremony for the Sydney Olympic Games in 2000 and he designed the graphics for the 2013 Sydney New Year’s Ever Celebrations. 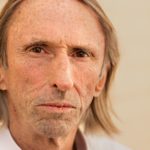 Christopher O’Doherty, also known as Reg Mombassa is a New Zealand born Australian musician and artist. He is known for his membership in... View Profile