At the age of 19, Tom lost both his hands and both of his legs to a deadly disease. Since then he has rebuilt his life, using prosthetics to master tasks that many able-bodied individuals often take for granted. Applying the lateral thinking techniques previously attained in overcoming physical hurdles, Tom circumnavigates a variety of challenges and has carved out a new line of thinking, which he lives by to this day.

It’s one thing to survive a life-threatening illness, it’s another to thrive thereafter; mesmerising audiences around the world as an in-demand public speaker, DJ, and quadruple amputee like it’s nobody’s business. Then again, failure has never been Tom Nash’s favourite F-word.

A taste for disruptive ideas, and a generous pour of Bordeaux are recommended accompaniments for experiencing the full flavour of Tom’s thought-provoking perspectives; the power of pragmatism, separation of ‘life-noise’, and the necessity for self-reflection. Tom allows no excuse for mediocrity, and no apology for adversity.

Tom views his physical configuration as simply a type of adversity as common as any other and says; “Everybody has hurdles, and everybody has some kind of disability, whether it be visible or invisible, external or internal, physical, mental, or emotional. The adversity is what helps build our character.”

Tom’s penchant for captivating storytelling, alongside his dark sense of humour and his razor-sharp wit are melted down into ideas for life that leave audiences truly grounded, and unequivocally hooked. 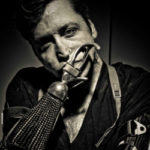 At the age of 19, Tom lost both his hands and both of his legs to a deadly disease. Since then... View Profile