In this fun, passionate talk, writer and performer Yve Blake challenges the myth that fangirls are something to be laughed at, pointing out the long legacy of sexist derision of young women who love fully. Instead, she asks us to embrace the fangirl in all of us. Yve Blake is an award winning writer, composer and comedian from Sydney. She likes to write things inspired by interviews with real people, and she LOVES to use music, silliness and spectacle to audiences hear and understand voices that they aren’t used to listening to.

Yve has written the Book, Music and Lyrics for FANGIRLS, a musical inspired by 4 years of researching and speaking to passionate fans. FANGIRLS premieres in Australia in 2019, and is currently being adapted into a series with an award winning production company. Yve is an alumni of the Royal Court Writers’ Programme and has had her work developed at Belvoir, Griffin Theatre, The ATYP National Studio, Old Vic New Voices, the Barbican, The National Theatre and Princeton University.

She was the recipient of the inaugural Rebel Wilson Theatre-maker scholarship at the Australian Theatre for Young People, and a guest speaker at London’s Women of the World Festival in 2018. She’s currently writing and co-writing several commissions for screenplays, musicals and even a musical podcast. For more info, head to yveblake.co 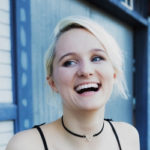 Yve Blake is an award-winning writer, composer, and musical comedian. She is an alumni of the Royal Court Writers’ Programme and... View Profile