Hugh Durrant-Whyte addresses what a robot is and what a robot isn’t. A robot is not just a mechanical automaton. A robot perceives and a robot acts. Hugh leaves open the question of whether the robots will get us all in the end. 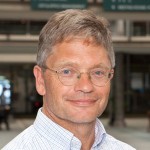 How can we design AI that we trust? | Fang Chen

According to artificial intelligence professional, Dr Fang Chen, "the continual use of technology hinges upon human trust. It’s one of the main roadblocks to overcome". In this fascinating talk,...

A day in the day in the life of the newest employee at the Sydney Opera House. Directed by Ian Williamson & Russ Tucker Screened at TEDxSydney 2016

As advances in augmented and virtual technology reinvent our relationship with ‘reality’, we are continually confronted with ever-more complex ethical and philosophical dilemmas. Making virtual interactive copies of human...

The robot doctor will see you now: evolution of robotic vision | Anjali Jaiprakash

In this enlightening talk, Robobiologist Anjali Jaiprakash demonstrates how she has used a robotic vision technology called Light Field to build a retina-imaging device that she hopes will help...

Munjed's ambition to become a world leader in osseointegration surgery started when he was a young child watching "The Terminator" movie. How to combine robotics and humans? This passion...

Mike Cannon-Brookes is a good example of why Wikipedia can be a bad first port of call to research an individual. Not only is the Atlassian co-founder’s wiki

Learning to play an instrument with your eyes | Jessica Irwin

From a wooden alphabet board to the iPad - photographer, graphic and web designer, Jessica Irwin speaks about the role of technology in her creative life. Born with a...

Imagine a primary school, where students from culturally diverse backgrounds can learn anytime, anywhere and with anyone. Imagine a school with no bells and where students can eat whenever...

How Can We Change The World via Quantum Physics and Nanotechnology?

Why does quantum physics make most people’s brain want to explode? Before we begin to consider how nanotechnology might be able to positively impact the world, let’s ensure that those of...

Your Brain Is A Remote Control | Karen Palmer

Interactive filmmaker Karen Palmer is part of a growing creative movement that seeks to empower game players through radical new approaches to technology and storytelling. To further this endeavour,...

Modern information technology gives us extraordinary power, but the way we build the underlying hardware has barely changed over the past century. What if instead of continuing along a...

It goes without saying that TEDxSydney talks are engaging, thought-provoking, and enlightening on many levels. Here we bring together the talks that went one step further, and completely blew our minds....

Target 100, in conjunction with TEDxSydney, invited two people to a remote cattle station in the Northern Territory. Watch their journey as they discover the innovation & technology behind...

Using magic tricks and computer hacking as examples, Alex Hope shows us that it's easier to trick us than we might think. It would be nice to think we're...

Reflecting on his experience living with six people in a simulated Mars environment, TEDxSydney speaker James Bevington shared the lessons he learned...

Why We Need Engineers Now More Than Ever | Elanor Huntington

Elanor Huntington argues that now more than ever we need engineers – as they are the ones who bring together people, technology and society, if only engineers could do...

How Camera Drones are Changing Our World

Camera drones are, literally, inverting the way we see the world. But could it be they are also changing the way we feel about the world? Is there some link...

Meet The Speakers - Previewing Our 2016 Speaker Line-up Jordan Nguyen’s mission in life is to improve the lives of as many people as possible and to be a driving...

Can you help us to design the future of TEDxSydney?

2016 has barely kicked off, but we're already thinking ahead  - to the future ways in which we might connect the TEDxSydney community, using the ever-growing number of mobile...

Can a Computer Write Poetry?

If you read a poem and felt moved by it, but then found out it was written by a computer, would you feel differently about the experience? Would you...

Tea Uglow has worked at Google for nearly 8 years, starting Google's Creative Lab in Europe and, since 2012, building a Creative Lab in Sydney, Australia. Her team work...

We Need to Teach Our Kids to be Makers

2012 Young Australian of the Year Marita Cheng is dedicated to changing the way girls view their capacity to contribute to engineering and technology. In 2008 she founded Robogals...

Lisa Murray argues for the preservation of our digital records and that they are more fragile than paper records. Dr Lisa Murray is the City Historian at City of...

Danny Kennedy is Sungevity's Founder and author of "Rooftop Revolution: How Solar Power Can Save Our Economy -- and our Planet -- from Dirty Energy". A long-time social entrepreneur,...

There is a shift coming in the very nature of computing which is being led by the likes of quantum physicist Michelle Simmons. Michelle wants you to put the...

Lars is a member of Google's technical staff, based in the Sydney office, and with his brother Jens, co-founded what eventually became Google Maps. He is currently driving the...

David Chalmers is Distinguished Professor of Philosophy and Director of the Centre for Consciousness at the Australian National University. Chalmers is interested in the relationship between mind, brain and...

Living in the Future

Inventor, scientist and entrepreneur Saul Griffiths, on how we can make the future awesome through better engineering (and a bit of imagination).